As some of you read on my twitter, I’ve been waiting for a package for almost a week now. They tried to deliver it on Wednesday but no one was home so they put a note through our letterbox, saying that I could pick up my package but not until Monday cause we had a long weekend in Belgium. It really pissed me off! I was dying to get this package and I had to wait for so much longer but finally today I was able to go and get it, yay!

They were false lashes from Madame Madeline, a great webshop that sells false lashes, lots of amazing brands you can’t get in shops around here. I was able to try out a few, Revlon, Andrea and Gypsy Lashes. They are very reasonable in price, some are way cheaper than the really horrible ones you can get in Kruidvat, but these are so much better in quality! From left to right and top to bottom: Revlon Defining $5.15, Revlon Short Natural $3.99, Gypsy Lashes 94 Black $2.05, Andrea Permalash Combo Black $3.49.

I was a bit silly and forgot to ask them for DUO Eyelash Adhesive, none of these lashes come with glue and most of the time glue that comes with lashes you purchase isn’t the best in the world. If you buy with Madame Madeline be sure to add in some DUO Eyelash Adhesive to your order, it’s the best glue out there! As I didn’t I’m going to pick it up at a MAC store on Wednesday, they sell the DUO Lash Adhesive as well.

I quickly tried on the Revlon Defining lashes, they looked really amazing. Though seeing as I haven’t got proper glue yet I’ll post some pictures with me wearing the lashes later on. In the meantime, definitely take a look at their website, they have lots of natural looking lashes like the ones I got but they also have very fancy ones for special occasions!

They were also very kind to add in some business cards, if you order with the code: falsies you will get 8% off! And a free gift if you order for more than $20. (I’m wearing Light As Air by China Glaze on my nails, so pretty!)

Huge post about lashes! I promised it to you a while ago and finally it’s here. Took me blood, sweat and tears but I finally finished it. These are a few of my lashes, mostly the more natural looking ones, but I added one of the more dramatic ones as well. My apologies, not all of the pictures are 100% sharp but you will get the idea.

These are my natural lashes without mascara. They’re quite short unfortunately so false lashes are a great alternative for me. These are my lashes with my favorite mascara, the falsies volum’ express by Maybelinne. Makes a huge difference doesn’t it? I always curl my lashes with a lash curler which is a very important step. First you curl your lashes, grab them and squeeze several times, then apply your mascara. 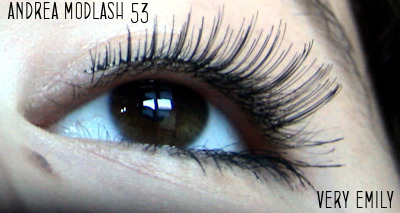 Andrea Modlash in 53, I received these from Madame Madeline. I really like them, they look very natural and suit my eyes. Excuse my sloppy application, the inside corner of the lash band isn’t close enough to my lashes (happens to me a lot) but it’s fixed by applying eyeliner most of the time. The pictures really tend to magnify everything unfortunately. Also, in none of the pictures I’m wearing eyeshadow because this way you can see the lashes better! 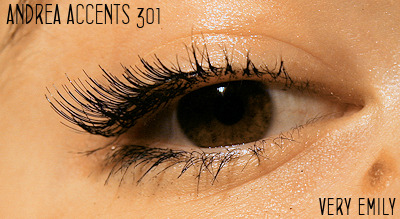 Andrea Accents 301. These are great lashes too and again not close enough to my lash line (sorry!) which shows up very clearly in close-up but not so much with a full make-up look on.. They just give a little added accent to the corner of your eyes, a little flutter of lashes as it were. I like wearing them a lot and they’re a lot easier to apply than a full strip of lashes and they look great. These and the next Revlon lashes from Madame Madeline. They’re very lightweight you can hardly feel them there. They look very natural and there are 2 pairs in one pack which is great. Thumbs up for these, I really like them. 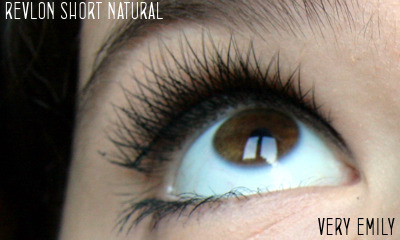 Revlon short natural. These are criss-cross lashes which I didn’t see until I received them, “that’s not going to look very natural” was my first thought but they do look nice! However the lash strip itself is a very hard band, you can really feel these sitting on your eyes which isn’t comfortable. Look great but I have trouble wearing them unfortunately. Andrea Modlash 82 received from Madame Madeline ma.  I’m so happy with these pictures, especially the top one.

These are quite dense and definitely for evening or a night out. I find wearing really dramatic lashes harder as I have hooded eyelids but these are very wearable especially teamed up with a dramatic eye make-up. I’m definitely a fan of these! These are the only individual lashes out of my entire list. Andrea Permalash flair combo black. I think they need specific glue for individual lashes though I applied them with my regular DUO lash adhesive which worked great as well. I applied seven knots of lashes, four of the shortest and 3 of the medium sized lashes. I still have to really practice with these because I don’t think I applied them that good. They look natural but I prefer strip lashes like the 53s for application. I didn’t cover them with mascara which you definitely should, it will attach your own lashes to the false ones and it will just make it look a lot better but I didn’t want to ruin these just for picture purpose.

Hope you enjoyed my entry on lashes, all besides the 82′s are available at Madame Madeline.

If you order with them don’t forget to use my coupon code for a free gift and 8% off, FALSIES.

7 Secrets About Fashion And Makeup That Amaze You

When looking for new trends on UAE shop and fashion dresses, we realized that there is…

END_OF_DOCUMENT_TOKEN_TO_BE_REPLACED

That girl needs some drama

I know I look a little bored with my sites so it's time more dramatic one.…