Boys in Fake Lashes? Viral Meme Dedicated to The Minions

The Facebook site is normally dedicated to the gentle and funny yellow creatures. 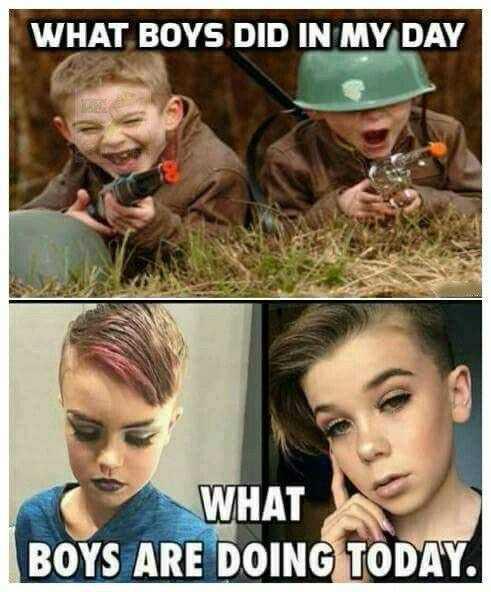 Many people are wondering why would they post this meme (picture above) to a social media club dedicated to the Universal Pictures animated stars of Despicable Me, the Minions. It's there that's for sure.

With over 6 million followers, the public group called " Minion Fans" is one of the larger publics groups of FB. Earlier this month they updated their status with this picture and was quickly viewed over 6,00o times very quickly like most incendiary posts usually do and the responses  were mixed with some supporting it and some hating it.

The split-level photo shows two boys playing with guns in the top panel with the caption, “What boys did in My Day,” while the lower panel shows what they presume to be boys in fake lashes, and heavy makeup with the line, “What boys are doing today.”

It comes to no surprise that the responses were divided, some agreed with the picture saying that today's boys are a bit less masculine then what ever era they are referring to and agree that boys should be about playing war simulations rather than playing with makeup.

“My boy would have gotten his ass beat if I caught him with makeup on! Adults – it's your job to raise kids not let kids raise themselves!” posted someone in the group.

And another, “Oh my God I fought tooth-and-nail to make sure that that didn't happen to my son I feel really bad for people who have to go through that God bless you.”

And yet another, “Ain't it the damn truth. Back in my day boys were taught to be boys and later grow up to be men. What a shame on where our society is today with all this crap of boys wanting to be girls and girls wanting to be boys. I blame the parents on this crap for not teaching their children what is normal. Boys don't wear make up or play with dolls. Boys play with trucks and cars , play football , play baseball fish and hunt and do the stuff boys are supposed to do. I don't care what some of you say back in the 80s this was not tolerated. Thanks to all the libtards for promoting this crap it is not normal.”

But some users weren’t going to let that be the last word. They defended the bottom portion of the post and responded to the haters.

“What's so wrong with boys expressing themselves finding what they really want to do with their lifes if that was my son i would let him do it if that's what he wants to do I'm gonna let him u can't keep them from wanting to express their true selves it's wrong be happy for them don't tear them down because they wanted to wear makeup and feel fabulous y'all discriminating," said one.

Here is another we have edited for clarity, “I don't care if my son's playing solder or doing makeup as long as he's happy and healthy I am happy …. and God has nothing to do with it with u feel like ur in the wrong body or just like makeup and dresses ur cwl u know who u are and feel strong and good about who u are.. like RuPaul says if u dont love ur self how u going to love someone else.”

Another posted: "Aren't minions Asexual? Don't some of them dress as women despite their names being masculine? So you're a fan of minions and them being who they wish to be, promoting it as a lifestyle but not kids being who they Are? Yea that makes total sense. "

To which someone responded, "no they are a cartoon figure WTF…… step back into reality "

The Minions Fans Facebook page is not a page that is officially licensed by Universal Pictures or Illumination Entertainment,  and sometimes will post things that have nothing to do with the cute little asexual yellow characters.

Gina Rodriguez’s False Eyelash Fell Off During The Golden Globes

END_OF_DOCUMENT_TOKEN_TO_BE_REPLACED

In our previous blogs, we discussed the brands that provide lots of variety to their customers,…