Who Made Those False Lashes? The False Eyelash Story. “When a fair young thing looks at you mistily through her long, curling lashes, do not fall for it until you investigate. The long, curling eyelashes may not be hers, except by right of purchase”

A writer once wrote the above about decorative eyelashes. False eyelashes have been in use for years. Today they are a stable inside any fashionista’s makeup bag.  Women and young ladies love the amazing look it adds to their face. Fake eyelashes add to the beauty and appeal of a woman. However, many of these female folks who love to use eyelashes do not know its history. Are you one of them? Well, in this piece, we are going to look into the history of false eyelashes and how it has become so popular among fashion enthusiasts.

The first fake eyelashes were created by Egyptians over a century ago using what is known as “kohl.” Kohl was mainly comprised of the grindings of a naturally found soft, lead ore called galena. Kohl was mostly used in the past to make eyelashes and it was based more on practical motivations than the cosmetic process. By cosmetic process, we mean using kohl to darkening the lower eyelid. Kohl is still widely used today, especially, in India and the Middle East as an eyelid shadow, eyebrow shadow, mascara, and eyeliner for fashion and cosmetic purposes.

While it is true that false lashes have been around for some decades before 1900, false eyelashes as we see it today were patented by Anna Taylor in 1911. Many people did not immediately embrace it at that time. It did not become common beauty tool until 1916, when D.W. Griffith thought that Seena Owen, the actress in his film should use eyelashes to brush up her cheeks. What he did next was to have his wigmaker glue false eyelashes onto Ms. Owen. This was done using spirit gum to stitch the lashes into place. This was a bit weird because a spirit gum was normally used to wear a fake beard on Halloween. It certainly was not for eyelids because it could cause the eyes to be swollen. However, the result was amazing.

Despite the early challenge of fixing eyelashes to the eyelid, it continues to gain acceptance. Between 1916 and 1921, fake eyelashes popularity was at the optimum level, especially among actresses. Back then, some people use eyelashes because they helped prevent glare from electric lights. This may sound absurd, especially if you have not personally experienced this claim by wearing a pair by yourself. At that time, every female could find false eyelashes being offered at Charles Nestle’s hair perming salon.

Fast forward to 1930, false eyelashes had become household name and number one item in most women wardrobe. It was in everywhere. A company called Vogue even promised at the time that it could give ladies some eyelashes of remarkable length. And many ladies rushed for the offer. One particular ad in the 1930’s, featured two models posing with eyelashes that were decorated with platinum. Of course, this showed that eyelashes were not intended to look natural. In the 1960s, when Twiggy was wearing fake eyelashes on her lower and upper lids, a cosmetic manufacturer, Andrea, challenged women to find their “eye-dentity!” this became a popular phrase that was to endure for years and was used commercially to promote eyelashes.

The period between 1970’s and 1990’s saw false eyelashes declining in popularity and use. No one could tell why it happened, but it seems new wave of fashions at that ensured that fake eyelashes were pushed to the background. However, some ladies still worn lashes to top up their face appearance. One of such ladies was Madonna who once wore a $10,000 pair of eyelashes, made out of mink and studded with diamonds in the 1990’s.

Today, false eyelashes have made triumphant return and many young ladies and women are crazy about it. What contributed to its popularity these days is that there are so many different options available to you when it comes to selecting false eyelashes. This was not the case in the past as it was hard to choose various eyelashes due to non availability. Nowadays, false eyelashes are made in different lengths, thicknesses, and even colors. That is what many women love. Besides, unlike in the past when fake eyelashes resembled nothing close to naturalness, it is now possible to purchase false eyelashes that look as natural as possible. This is a big plus for eyelashes!

However, if you want to obtain fake eyelashes that look natural, you should buy those that are not too thick, or too dark. You need to feel it in your hand to know its level of softness. For color, it is advisable to select those that are dark brown. If your skin color is dark, then you could wear black eyelashes. It will look well on you, but if you have blonde hair, go for light-colored false eyelashes. Just make sure you select one that matches your skin color and hair. That way, you will not look out of sort.

False eyelashes have come to stay and it is expected that in the coming years, it will remain ever popular. The fact that technology and innovation continue to evolve will surely have positive impact on fake eyelashes. Its acceptability is expected to grow because it enhances the look of a woman and women love to look good at all times. Some women and ladies cannot go out without putting on their eyelashes. No doubt, false eyelashes are beautiful invention whose history is inspiring. From the old tick and gum-stitch eyelashes to now soft, almost natural eyelashes, this beauty tool can only continue to grow in the coming years. 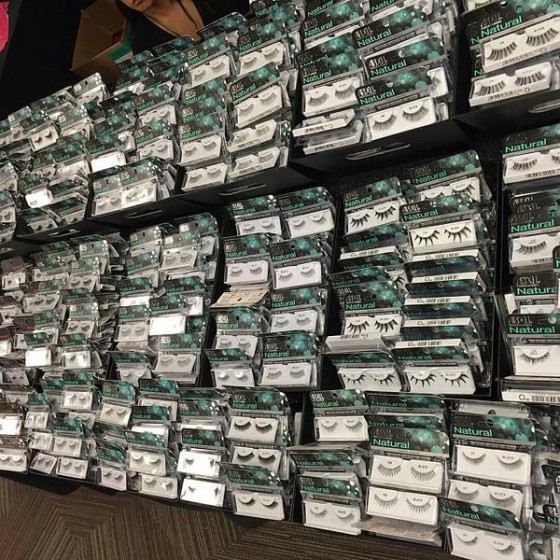